How to Turn On the Weather in Minecraft

The weather in Minecraft is made up of occasional weather shifts that are short and temporal. They come in the form of rain, storms, snow, and the clear sky.

The type of weather that occurs in a players’ world depends on certain factors like the temperature of the player’s present environment (is it a cold climate or hot one) and even the height of the area a player is at a particular time. 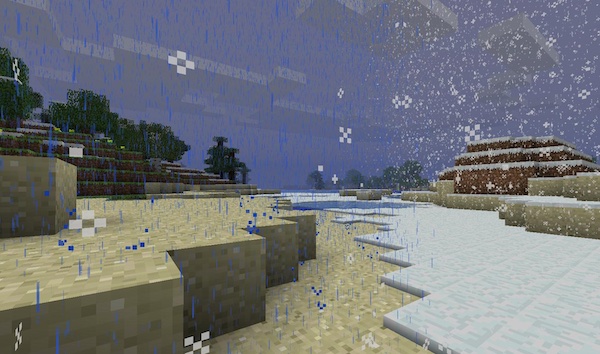 How to Change The Weather in Minecraft

Periods in the above context represent how long in seconds, the weather a player switches to would last for.

The Effects of the Weather Condition on the Game

More rains occur in environments that are warmer and when it rains during the day, light levels are reduced. Though the rain is good for forests, vegetation, and wildlife it has other effects on the game.

Rain puts out fires like the flaming arrow but at the same time doesn’t turn lava solid. Fire mobs are put out by the rain and as such, creatures like zombies and skeletons wouldn’t be able to burn during the day

Some positive things that happen because of the rain include abundance of fish, hydration of farmlands, cauldrons are filled up with water, and so on

For snow to occur in any environment the temperature should be lower than 0.15. When the snow falls, the layers of snow tend to continuously increase in size over blocks that are not transparent and this occurs over time. But it is important to note that snow is not rainfall and as such, any creature that happens to be on fire can not be put out if it is touched by snow

Thunder can occur in any and every environment and when a thunderstorm happens, a player’s world would become dark and the light level reduces to as low as 10.

Lightning is what follows the thunderstorms. It strikes anywhere randomly as it is directionless. Often these strikes lead to fires that could spread but are put out by the rainfall. Lightning can only strike the blocks that are left under the rain and exposed.

Lightning, when it strikes, turns villagers to witches, creepers to supercharged creepers, pigs to zombie pigs, and so on.

A player can even call for lightning to be brought upon its lands/environment. The player need only enter

Note: when a player attacks with a trident that is charmed with channeling during a thunderstorm, a lightning bolt will follow and will strike anywhere in that environment.

How to Turning the Weather On/Off in Minecraft

The first thing a gamer should know is that there is no permanent way to turn on/off the weather forever. But there are cheats to toggle around it.

To be able to run game commands in Minecraft, the cheats in your world has to be turned on because it is set to default mode which is off.

Another thing to note is that there is no immediate button, switch, or click embedded in the game that automatically turns it on/off. All commands are typed as code.

But just before we get into the codes, here are some things to note:

This is the kind of weather cycle Minecraft world can be changed to that is:

The duration is at its highest is a million seconds which is about 11.6 days. The duration should be typed in at the end of the cheat code to tell the game how long that particular weather mode would last or how long it would be turned off.

The original command which was typing toggledownfall turns the weather on/off but it doesn’t stay that way for long as it toggles back. If you toggle it off it would toggle back on making the weather a lot annoying.

The first command is:

Then it will cycle back to rain/snow.

To set the weather to clear for a day input:

To just turn the weather off:

If the command is set correctly, Gamerule doWeatherCycle is now set to false should appear on your screen.

And now if you change your weather to either clear or rain or whatever it will remain that way.

Another thing to note is that there is no snow command. To turn the snow weather on, go to an area where it snows and input

And it will begin to snow.

A fascinating thing about this cheat code is that when you use gamerule and save the game, the game will remember the gamerule.

The weather in Minecraft can be very annoying since it acts by following its rules. A gamer would input toggledownfall to turn the rain off and after a few seconds or so, it would cycle right back to raining, making building and defending of structures and items hard. It also makes it difficult to use the weather as an advantage when playing

But with the gamerule cheat variant, a gamer can remain in clear weather for much longer periods and if the gamer prefers it to the thunder and lightning all the time, that can be done.

Though Minecraft is a large world that can sometimes frustrate its gamer, with time, effort, cheat codes and truckloads of creative imagination, the gamer’s would easily be built, upgraded and defended against all