Minecraft Not Using GPU? Here’s How to Fix It

The Graphics Processing Unit (GPU) is what determines how a game looks. It is not just the colors and contrast of the objects; it also deals with moving images and their responsiveness.

Minecraft developers designed this game as a basic game, but things have changed since then. Playing it without a GPU is a terrible idea. Moreover, there are lots of improvements that are put into it every time, and most of them will not be useable on systems that do not have a GPU or that have a slow GPU.

Opting for a PC that has a GPU is highly recommended. Also, the newer the GPU model, the better Minecraft and other games will run. But if you’re able to run it without GPU, you will get an extremely low FPS, and you’ll be able to only access the older versions of the game.

Before we show you how to fix the issue of Minecraft not using GPU, there are certain things you’ll need to know so you won’t run into more problems later. 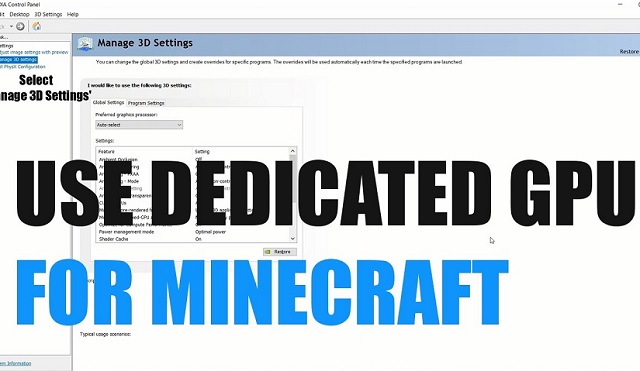 Onboard Graphics vs. Dedicated GPU

If you’re using a dual graphics card computer that includes integrated Intel GPU and dedicated NVIDIA or AMD GPU, there is the likelihood that Minecraft won’t use the dedicated GPUs which gives better graphical performance.

Minecraft can run with just the onboard graphics card. You don’t really need to play Minecraft with a GPU, but you’ll get a lesser experience because you won’t be able to access some updates. It will also take longer for new blocks to be created; the animations will be choppy or it won’t even work, and your FOV will be very low. In some cases, you might take an action but you won’t see it happen, instead, you will see the after-effect.  Moreover, modding the game will be out of the question.

The power of the GPU also matters because it is what determines the level of realism in the game and how smoothly it works. However, you should know that even if your system has a GPU, sometimes Minecraft will use the on-board graphics instead, and this will render the GPU useless. It is almost like not having a GPU at all because your gameplay won’t be different from that of systems with no GPU.

Minecraft Not Using the GPU: How to Fix The Issue

There are two different methods we will write about based on the kind of dedicated GPU you’re using. These methods can also be used to configure dual GPU graphics settings for other games.

If these steps look a bit complicated, you can try this method:

If you’re using a computer with no GPU or a very low GPU, you might not be able to fix this issue. The only solution available for you is to get a new PC. Also, you might have to make use of the old Minecraft version because those are the versions that can work with no or low GPU.