How to Make a Poison Arrow in Minecraft

In Minecraft, the arrow of poison is an arrow laced with the lingering potion. The arrow is shot with a bow and once shot at an opponent, the arrow poisons it for the period it lasts but this may increase due to the level of the arrow.

The effect of the poison lowers the health of the player it was attacked with. But this doesn’t mean the death of the player. The arrow is used to make the enemy weak, making it easier to finish off the enemy with other weapons.

The poison from the arrow can be cured with a honey bottle, an antidote.

Then, the 8 arrows would appear in a single grid box beside the 3 by 3 grid box and it can now be moved to the gamer’s inventory for use. 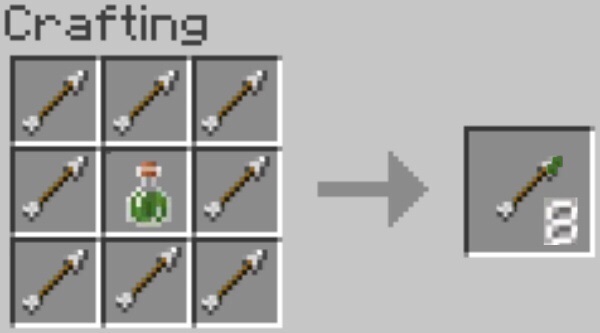 Creating a Poison Arrow in Minecraft

The arrow of poison by Minecraft is a survival tool/weapon that can be shot using a bow. Once a player or group of players (a mob) with this arrow uses it on the enemy, they will be hit with a poison effect that would last for about 11 seconds. Only 8 arrows can be crafted at a single time.

The poisoned arrow is available on the following versions of the Minecraft game;

How to Make a Poison Arrow in Minecraft: Steps

Note: When placing the ingredients to make the arrow of poison in the grid box, let the lingering poison be in the center box of the 3×3 grid.

That is, the lingering poison should be placed in the 3rd row and its 2nd box.  In all other empty boxes of the grid, place all arrows in them. Both 1st and 3rd rows should have arrows respectively. This is the Minecraft creative recipe for the poison arrow.

Once this is done, the arrow of poison, which is now 8 in number, will be seen in a box that would appear by the right side of the 3×3 grid.

Move this arrow to the inventory

Now, the arrows that would aid in a gamer’s survival have been created, the next thing to do is to move them to the inventory.

Once done, the arrow is now stored in the inventory and is ready for use.

Give Command for Arrow of Poison

As is already noted above, mine craft has various versions of the game and with each version could come a different and not so different give commands for some and all tools/survival weapons.

In the Minecraft Java Edition for PC/Mac, there are short commands that can initiate the arrow of poison. The Give Command for Arrow of Poison is different from other commands for other types of arrows created.

Minecraft is a fun, creative and adventurous game that both kids and adults can play and enjoy. The game’s vast world enables a player the chance to explore and create structures that would define its world. Not only can kids and adults play it but a player can also invite other players to its world.

Because it is an adventurous and survival game, the need to create tools and weapons that would help keep a player alive. The creation of these weapons like the poison arrow is easy to create and use once a player is ready to put in time and effort and of course a lot of imaginative thinking.