How To Get Shaders in Minecraft Java

Shaders are programs that run in the graphics pipeline that pass information to the computer about how each pixel should be rendered. And as the name implies, these programs are called shaders because of their significance, or how they are used and why they are used. Shaders are usually used to control the lighting and shading effects of images or videos, and could be used to create other special effects.

However graphics designers often use shaders for shading in 3D scenes to enhance an even production of light, of darkness, and even of color for a perfect image rendition. Shaders are used widely in cinema post-processing, computer-generated imagery, and video games to produce a range of effects.

On the other hand, Minecraft Java is the java edition of the Minecraft game. Minecraft has so many editions that include Windows, MacOS, and Linux, to mention, but the Java edition is the most compatible, and the Minecraft Java edition has a cross-platform play between Windows, Linux and macOS, and equally supports user-created skins and mods which generates a different kind of pleasure for players while playing the game. It includes a lot of updates and makes Minecraft really interesting. You can find out after you make a purchase. 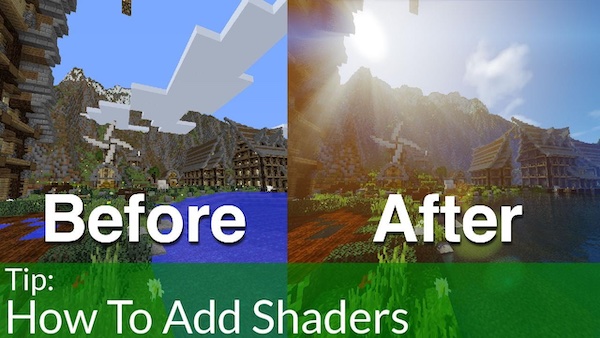 How to get shaders in Minecraft Java

The Optifine is the first tool you should download before you download the Shader on your system, so that it will be easier for you to tune the Minecraft Java graphics. More so, Optifine is also an important optimization tool that allows Shaders to work on your system.

However, here is what you should do to install the “optifine”  tool.

First, visit the official download page of the “Optifine” tool and download the latest version of the program.

Among other things, make sure that you are running the latest version of Minecraft Java.

You can proceed to launching Minecraft Java to confirm that it has been successfully installed.

If Optifine has been successfully installed, you will see a new ‘Optifine’ profile on the left bottom part of the screen.

Having installed Optifine, you can go on to download Minecraft Shaders.

There are plenty of options to choose from when it comes to Minecraft Shaders. One of the most popular shaders is Sonic Ether’s Unbelievable Shaders (SEUS) which happens to be one of the oldest Minecraft shaders.

After installing, take the following steps to install shaders in your Minecraft Java.

Step 1: Launch Minecraft Java on your PC and choose the ‘Optifine’ version.

Step 3: Find ‘Shaders’ under the video

Step 4: Select the ‘Shaders Folder’ option which is located in the left bottom part of the screen.

Step 5: This will open a new window and take you to a new folder. Here, you need to locate the SUES mod that you have downloaded in the above step and move it into this new folder that you have just opened up. Reboot the game.

(The difference between this method and the alternative lies in step five).

Step 6: Play the Optifine version of Minecraft Java and repeat the steps from step one to step three. The new shaders pack will be displayed on the screen.

You have successfully installed Shaders for Minecraft.

Or you can try the second alternative which involves…

Below is how these can be done:

Just like in the first alternative, You need to install Optifine in order to get them up and running in the device.

There are different types of shader packs. There are the dark ones that are a bit spooky,  and bright ones that are as bright as a fluorescent bulb, and so many other packs, depending on the purpose you need it to serve. Whatever shader you are looking to download, be sure that it serves the required purpose. For Minecraft Java, you can download continuum or Sonic Ether unbelievable shader.

There are also more shader packs that have been verified to be working with the latest version of Minecraft and the Optifine app, so chances are that there won’t be any compatibility issues.

It is important that you understand that Shader packs are usually source-sensitive, so it is recommendable that for you to play Minecraft Java with shaders,  you will need a very good device; desktop PC.

After downloading the shaders pack, and choosing your favorite shaders pack, you just need to open the Minecraft launcher and play the ‘Optifine’ version.

While you are on the Minecraft main menu, click the ‘Options’  button.

Then go on to click on the ‘Video Settings’ button.

Proceed to the next page, click ‘Shaders’ and you are very close to getting shaders on your Minecraft Java.

Finally, just click on the ‘Shaders Folder’ button that can be found on the left bottom of Minecraft, notice that a new folder window will open up, to indicate that the process is almost done because most times, the hardest part of getting shaders installed, is accessing the shaders folder.

As soon as you have the shaders folder, quickly move the shaders you already downloaded into the ‘shaderpacks’ folder you just opened in the previous step.

After that, carefully exit that folder, then restart Minecraft.

However, you have to make sure that you select the Minecraft Java optifine version, before you begin to use the shader.

When you get to the MinecraftJava, kindly repeat step three, but stop just before opening the ‘Shaders Folder’.

Install the shaders pack you see on your screen.

If you want to enjoy the minecraft games, especially with the Java edition, you should just follow either of the steps above, and get shaders for your Minecraft Java. Also note that the two alternatives are almost the same, only that they have little variances in the steps.