How to Change The Tick Speed In Minecraft

Every avid video game player is aware that most video games have a game loop and Minecraft is not exempted from this. 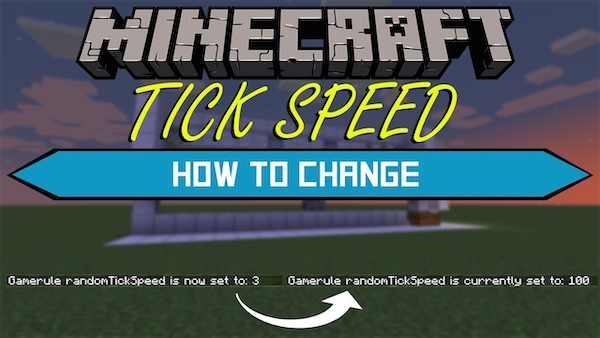 Ticks in Minecraft: What Do They Mean?

In Minecraft, one complete game loop is called a tick and one game in Minecraft usually runs at a pace of 20 ticks per second(TPS), and one day in Minecraft is a total of 24,000 ticks in 20minutes.

The game time for video games like Minecraft is not dictated by actual time but the number of ticks and this could take longer if the game program is run on a slow computer. Therefore, the actual time a server takes for one tick is called milliseconds per tick(MSPT).

Types of Ticks in Minecraft

It is important to know all the types of ticks on Minecraft so you can take full advantage of them.

There are three main types of ticks and they are:

These happen every second at 20 ticks per second. After every game tick the following things occur among many others:

These happen after every two game ticks which means they occur at 10 ticks per second. The redstone ticks are examples of scheduled ticks that happen in a consistent pattern.

The redstone ticks/repeaters are used to upgrade redstone signals to full strength and to keep signals in one place.

These also happen at every second at 20 ticks per second. A chunk is a part of the Minecraft game world that is made up of 16 by16 by 256 sized blocks.

With chunk ticks come block ticks at a rate of 48 blocks per chunk. This rate is set at a default 3 ticks per block(in Bedrock edition) and 1 tick per block(in Java edition).

Chunk ticks do the following updates among many others:

How to Change Tick Speed in Minecraft

The tick Speed in Minecraft can be checked using the command /gamerule and it can be modified using the /gamerule randomTickSpeed command.

Changing your tick speed can be done in a couple of ways and they are:

Once your chat window is open, enter the command /gamerule random TickSpeed<value> and save changes. You will have to reboot your server for the changes to take full effect.

Going through the server settings is another way to change your tick speed easily.

Follow these steps to change your tick speed through the server settings:

3. Entering a value in settings

For some versions, the random tick speed can be changed through settings.

The <value> is the number of ticks you want to set your game to.

When the value is set at 0, all ticks are disabled. Also, when the tick speed value is too high Minecraft will consider your game to be in cheat mode and will likely disable your trophies and achievements.

Increasing the tick rate to high values could also increase the rate at which your game lags and make it unplayable.